On September 20, 2019, we quietly celebrated my father’s 93rd birth anniversary. B. Anantharam Rao, (Ananth to his cricketing friends) or B.A.Rao ( to his colleagues in Burmah Shell and Indian Oil) or BAR or simply BA (to his many Club friends in Madras and Bangalore) was born in 1926 in Udupi in the erstwhile South Canara District of the old Madras Presidency, then under the British Raj. 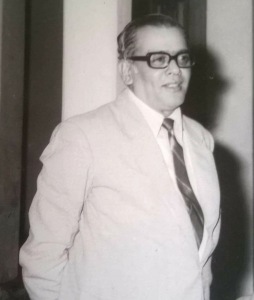 His family moved to the big city of Madras, the capital of the Presidency,  to improve their fortunes sometime in the 1930s. Here, they lived in cricket crazy Triplicane, so close to the old stadium at Chepauk with its famous Wallajah Road End and the Madras Cricket Club end.

Growing up we were told, time and again, that the Chepauk crowd was amongst the most knowledgeable in the world! Test matches were held here from 1934 to 1952. Madras featured in the world records in 1955-56 when Pankaj Roy and Vinoo Mankad scored 413 as openers versus New Zealand. This was at the Corporation Stadium near Madras Central, later called the Nehru Stadium. I saw my first Test match in Chennai here in 1962 when India beat England with my hero Salim Durani taking 10 wickets in the match. The Test matches shifted back to Chepauk in 1967 when the West Indies toured under Gary Sobers. The team included a young debutant called Clive Lloyd!

So cricket was, is, and always will be a passion amongst the people of Chennai. A sample of the craze can be seen in the affection for the local team Chennai Super Kings in the  Indian Premier League, (IPL). But this post is not about cricket in Chennai now. It is about cricket in the Old Days! When I speak of the old days, I realize that time is relative. For some, two decades ago when the new millennium began is a long time ago, for others the old days may date back to the 1970s.

But I write of the late 1940s in Madras ( as Chennai was then known as) when my Dad played his cricket as a young man. Growing up in the bye lanes of Triplicane, he must have been influenced by two opening bowlers from that area, the legendary M J Gopalan ( who had the unique distinction of playing both cricket and hockey for India) and C R Rangachari.

Dad was a rare bundle of skills in that he was both an opening bowler and an opening batsman. He studied at the local Kellet High School and then went to Pachaiyappa’s College for his B A (Hons). He played Club cricket ( Minerva Cricket Club) and University cricket from perhaps 1945-46 to 1949-50. In those days, City Vs Mofussil was another popular encounter which City ( Madras) invariably won easily. Dad played a few of these and one of his opponents in the Mofussil team whom he came to know off the field was the genial Raja of Pudukottai.

The albums of newspaper cuttings that traced his career as a cricketer unfortunately have faded with time and cannot be retrieved. I do remember reading the newspaper clippings as a young kid with great interest! I have pierced together what one remembers being told as a child. My father didn’t talk much about his career but other relatives like his brothers who were his biggest fans did! They spoke of the days when he was one of the most prominent players for the Madras University. He was the Vice Captain in 1948-49 and 1949-50 , his skipper being his close friend Kannaiyaram, who went on to captain Madras and later toured the West Indies in 1953.

Dad was called for trials for the Indian Combined Universities to play the touring West Indians  in Bombay in 1948. John Goddard was their  captain, Gerry Gomez, the vice captain and the team included George Headley, Clyde Walcott and Everton Weekes ( who hit three centuries against India in the Tests that series). Dad’s claims as an all rounder were probably bettered by a young man from Nagpur, Polly Umrigar, who went on to become one of India’s biggest stars of his times. Umrigar scored a century in the Indian Universities game versus the West Indies and didn’t look back after that. The standards of University cricket in those days were pretty high. From the 1949-50 Indian Universities team as many as 6 went on to play for India: Gulab Ramchand, Polly Umrigar, Pankaj Roy, Nana Joshi, Subhash Gupte and Deepak Shodhan.

One of Dad’s prized possessions was an old photograph, I think it was Madras versus Holkar where he is with legends of those times like Colonel C K Nayadu, his brother C S Nayadu, C T Sarwate and the elegant left hander and prolific scorer, S Mushtaq Ali. They said Dad’s claim to fame came when he got Mushtaq Ali out. For months thereafter, in the streets of Triplicane he became known as the “boy who bowled Mushtaq Ali”!

Madras cricket had stalwarts like M J Gopalan, C R Rangachari, B C Alva, and two people to whom he owed so much: they were household names of Madras cricket in those days, C P (Conrad Powell) Johnstone and A G Ram Singh. They saw the potential in him and encouraged him like no one else did. Johnstone had captained Madras since the first ever Ranji Trophy  match versus Mysore in 1934.

My father’s family was not affluent and he could not possibly make a living by playing cricket. I am sure it was C P Johnstone’s recommendation that gave him a job in a coveted company like Burmah Shell. Dad was posted to Ooty and later got married in  1950. He had to reluctantly leave his beloved cricket grounds of Madras. There was really no choice in the matter. With that his playing career pretty much came to an end.

I read this beautiful article by Pradip Dhole about Mr Johnstone. My respects to him not just for supporting my Dad and other youngsters like him but for having been such a fine human being.

A G Ram Singh was a legend  in Madras. His sons Kripal and Milkha, also Triplicane boys went on to play for India. I remember how affectionate Milkha was to him when Dad took me to the St Marks Hotel in Bangalore, perhaps in 1959-60. The Indian Universities were playing Richie Benaud’s Australia at the old Central College Grounds. I remember shaking Peter Burge and Les Favell by the hand as a star struck youngster after they had thrashed our bowling!!

I loved this article on Ram Singh by V. Ramnarayan, the renowned Madras and Hyderabad offie and a wonderful writer.

Some years later, Mr Ram Singh, then in his late 50s came to The Lawrence School, Lovedale to coach us at cricket in the ’60s. When I ran to take a catch, memories from over 20 years ago must have come back to the Old Man. To everyone’s surprise, he shouted, “Catch it, Ananth!” That must have brought  a smile to Dad’s face when I wrote about this to him in our weekly letters from School.

One of Dad’s proudest moments came much later in his life when he became a member of the prestigious Madras Cricket Club, established in 1846. He wouldn’t have imagined that possible when he was a boy growing up in Triplicane. The Club was geographically close to where he lived but in many ways was too far away from his world!

I noticed the other day that by co-incidence, both my Dad and his mentor Mr Ram Singh passed away in the same year- 1999. The stumps were finally drawn!