I am not really sure which of the bookstores have my books in stock. Many have them, some don’t. It’s very difficult to keep track. However, it is far easier for an author to provide links to on-line portals where the time to deliver is clearly stated. So, here goes as I try to put together all the links I came across, which you can use to order my books. Terms and conditions as also the prices do vary, but this may be useful to readers:- END_OF_DOCUMENT_TOKEN_TO_BE_REPLACED

My second thriller, “Lucky For Some, 13” was released recently. In this post, I thought I would give the different links should you wish to order the book through any of the on-line portals. They have varying prices and delivery terms, please check what  suits you best. Some of them offer very attractive introductory prices. END_OF_DOCUMENT_TOKEN_TO_BE_REPLACED 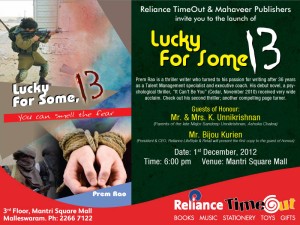 I am delighted that the invitation to the launch of my second thriller, “Lucky For Some, 13” has been released by Reliance TimeOut. The Guests of Honour will be Mr. & Mrs. Unnikrishnan, parents of the late Major Sandeep Unnikrishnan, Ashoka Chakra. This will be on December 1, 2012 at Reliance TimeOut @Mantri Square.

In the meanwhile, as is the norm these days, on line sales are on, pardon the pun! It was very gratifying to see that LFS13 ranks #1 among the “New Releases” in Amegabooks, where it is still available for a very reasonable Rs. 98/- Really, at that price, it is a steal!

Yes, “Lucky For Some,13” my second soon to be published thriller is now available on pre-order basis, for delivery within India.  It is fast paced and is about a terrorist attack in Bangalore in September 2010. The price is most attractive, so grab copies for your self, your family and your friends from Amegabooks.  END_OF_DOCUMENT_TOKEN_TO_BE_REPLACED